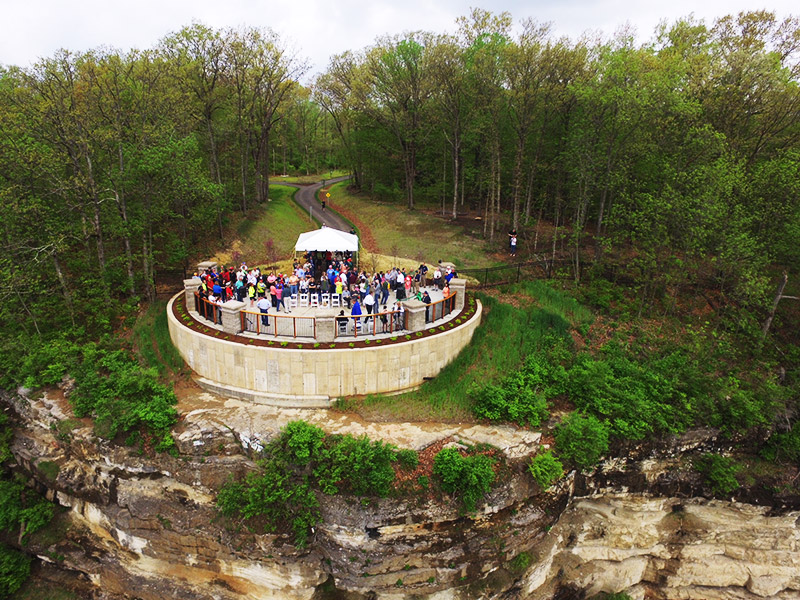 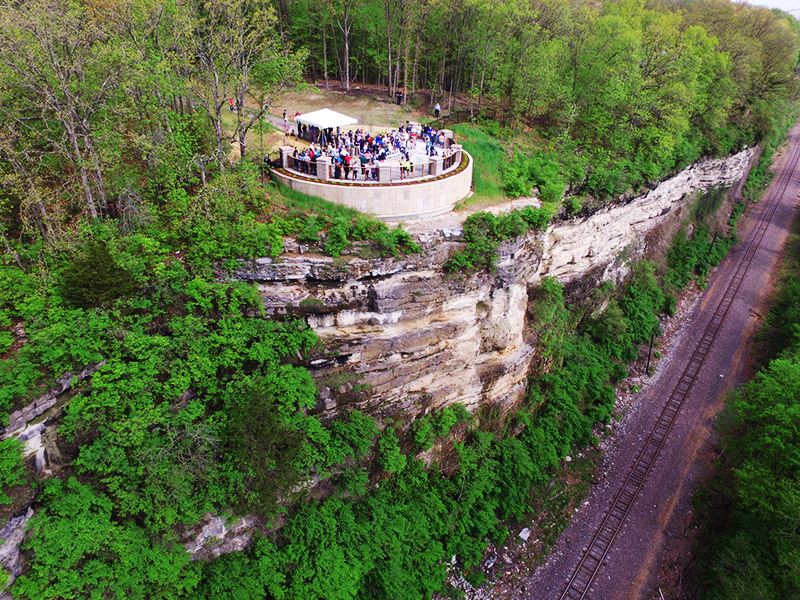 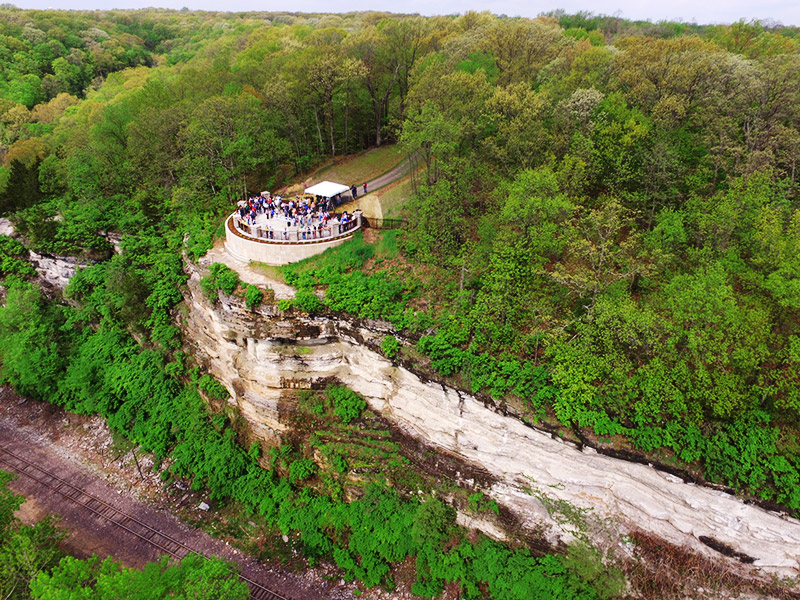 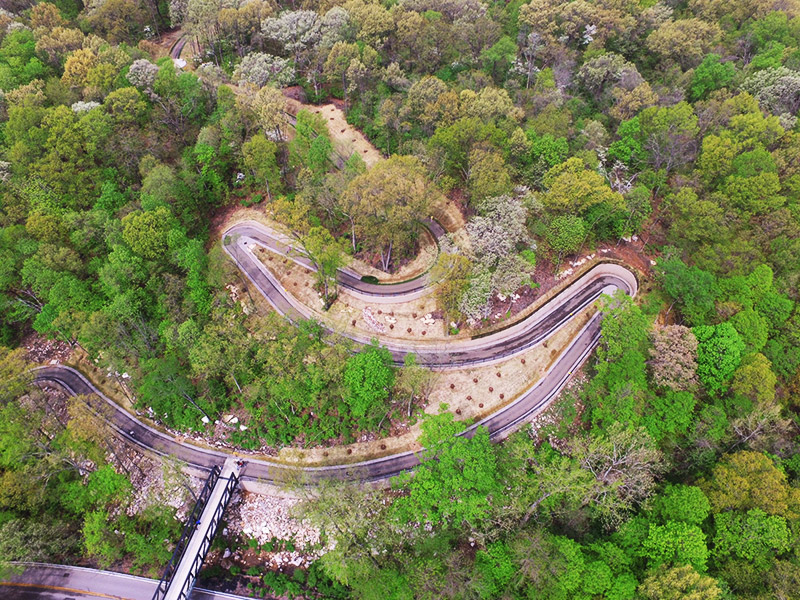 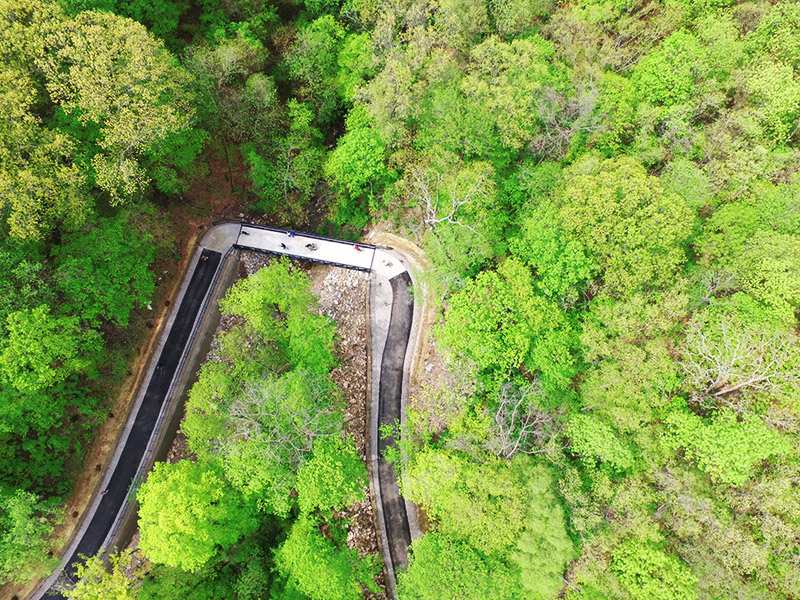 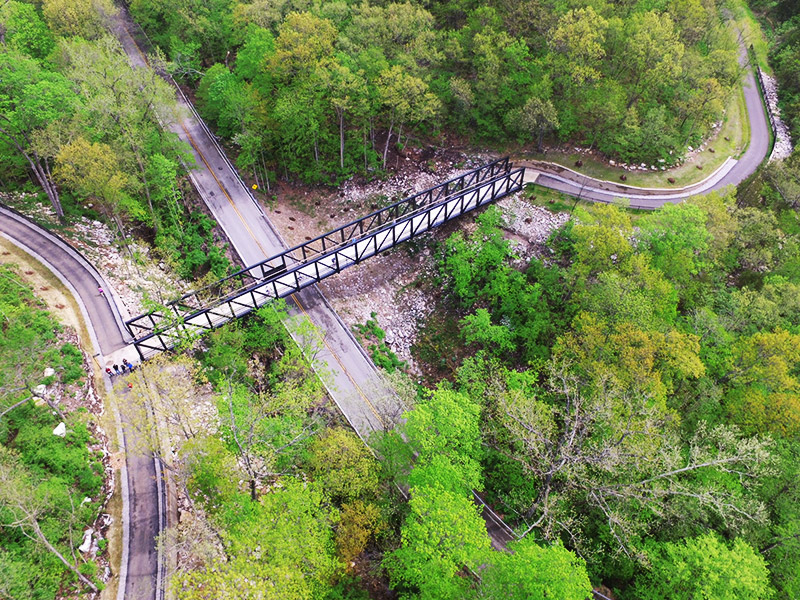 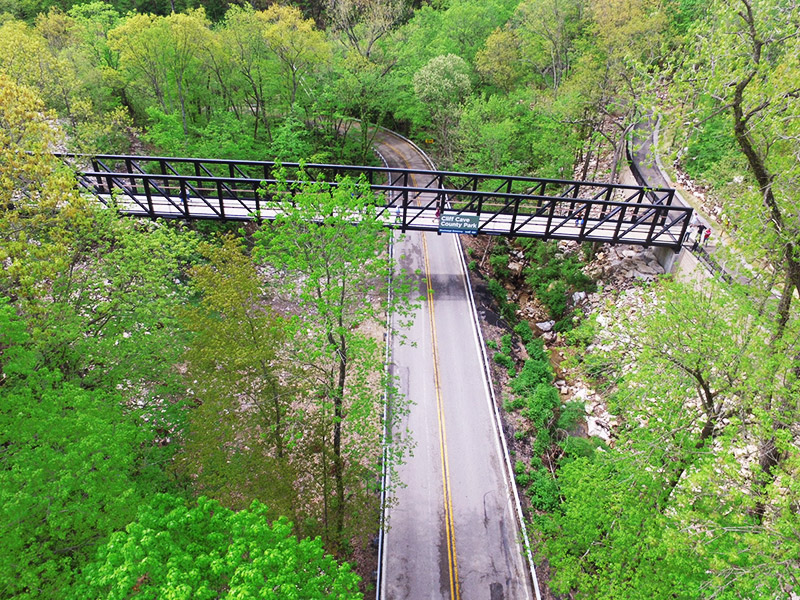 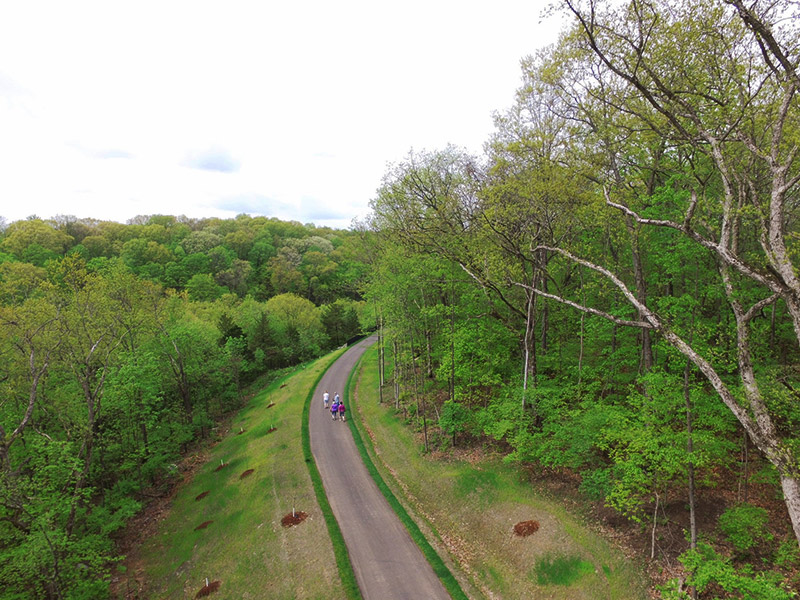 “Conceptually, we started planning when we finished the first phase of the park’s lower-level, five-mile loop in 2008,” said Pat Owens, Project Manager for Great Rivers Greenway, the St. Louis organization that oversaw development of the trail. “It took some time to work out the exact alignment. It’s a fairly sensitive area with Cliff Cave and the natural habitat. We were challenged by the topography and trying to find an alignment that would be the most cost-efficient, least damaging to the natural area, and presenting with a grade close to if not compliant with the Americans with Disabilities Act.”

Designed for walking, jogging, pushing a stroller, riding a bike, or using a wheelchair, the paved greenway now runs along the Mississippi River up the bluff to a scenic overlook. “A great deal of acreage in the park was largely inaccessible to people who aren’t very able-bodied,” Owens said. “Now visitors can park in the upper lot that was constructed and walk a half mile to see the beautiful view at the new overlook.”

The new pathway required 13 retaining walls for switchbacks along the steep bluff, as well as a 210-foot pedestrian bridge over a busy road and a 70-foot bridge in the woods by the cave. Funded through sales tax dollars and opened this spring, the $5 million expansion project also features a new bike and pedestrian connection for nearby neighborhoods.

General Contractor Ideal Landscape Group of St. Louis was awarded the low-bid construction contract in January 2017. They originally planned to start clearing trees right away, since that part of the project needed to finish by March 31. Around April 1, an estimated 10,000 to 14,000 Indiana Bats (an endangered species) end their hibernation in Cliff Cave to roost in the park’s trees through the summer.

Unfortunately, due to delays with permitting and other issues, tree clearing couldn’t start until March 1. Despite challenging spring weather, the work still finished by the end of March.

“We used three clearing crews instead of one and worked a lot of overtime,” said Dave Buckel, President of Ideal Landscape Group. “Because we started late and had the short window, we just worried about getting the trees on the ground. Once we met our deadline, we picked up the piles, made them into mulch, and scattered the mulch in the park.”

After the tree clearing, Ideal Landscape Group tackled the next challenge of keeping the trail’s grade under five percent. For the portion of the path coming down the bluff, that meant switchbacks with steep retaining walls. Constructing those in karst riddled with sinkholes – in an area that couldn’t be reached by heavy equipment for boring and drilling – required educated guesses.

“Topographically, the area is rolling hills with a lot of rock outcroppings,” Owens explained. “At some points on that hillside the contractor hit bedrock immediately; at other points they dropped down 20 or 30 feet before hitting the bedrock. Because of that, we couldn’t fully know how much rock we’d need to shore up the retaining walls, or whether they could simply connect into the bedrock.”

That significantly complicated the project budget. “Because the costs weren’t really knowable going in, we built a fairly large contingency,” Owens said. “We worked through that, even as we pared back costs at times, but our board saw the project’s value and remained committed.”

During construction, “We hit rock in areas we didn’t expect, and sometimes in areas where we expected rock it wasn’t there,” Buckel said. “We’d have a plan, then every few days something would change and everybody would meet. After the engineers consulted we would go deeper with foundations, do soil remediation to make sure the walls sat on firm ground, or modify grades underneath the walls.”

Ultimately Ideal Landscape Group excavated 3,500 cubic yards of hard rock. “There wasn’t enough room to bring a crusher onsite, but they had a spot in the park that we filled in for future development,” Buckel said.

“We had a very long, narrow corridor,” Buckel said. “It’s not like a road that’s up to 50 feet wide; the trail was 10 feet wide plus some shoulders. We had to move all our material roughly one-and-a-half miles through the woods on a dirt trail. We couldn’t get highway trucks anywhere close to where the walls were going, so we had major feats with off-highway equipment to get that material back there.”

Given the constraints, the process took longer than usual. “Our subcontractor couldn’t start paving until the walls were done, but the wall guy couldn’t finish until we had it excavated,” Buckel said. “It was very linear because we couldn’t access the area from different sides. We could only fit a three- or four-man crew. It just took time.”

Bridging the Road and Woods

Throughout the project, St. Louis County wanted to keep the park operating as usual. That became trickier during construction of the 210-foot bridge over the park’s main road.

The bridge came from Minnesota to St. Louis in four sections, each approximately 52 feet long and 16 feet tall. Ideal Landscape Group rented one of the largest cranes in the area – a 675-ton Link-Belt truck crane – from Sterett Crane & Rigging in St. Louis.

“If we didn’t use that big of a crane, we would’ve had to build a shore tower on the edge of the road to hold half of the bridge up while we set the other half in place,” Buckel said. “The larger crane allowed us to assemble the bridge on the road then set it in one operation, which saved time and money.”

To accommodate the huge crane, crews filled in a ravine with 2,000 tons of crushed stone to make a crane pad. After setting the bridge, they removed all that rock to protect the environment.

The road closed for just one week as crews assembled the bridge, then the crane lifted it, swung it perpendicular to the road, and put it in place. “We asked the crane operator to lift it high enough – about 40 feet – so most of the trees wouldn’t be damaged,” Owens said.

Construction of the other, 70-foot bridge over the creek by Cliff Cave proved easier, though not without its own challenges. “Getting a crane back there was pretty much impossible,” Buckel said. “We ordered that bridge in two halves, thinking we might need a shore tower. After we made our access road, we figured out we could assemble the bridge in the lower parking lot and use two excavators to walk it down the trail and set it in place.”

Breathtaking Views for All

For construction of the overlook above the Mississippi River, “It was literally 150 feet straight down to railroad tracks,” Buckel said. “We took extra safety precautions to make sure no one accidentally stepped off the edge. We drilled holes into the bedrock and put up heavy-duty chain link fencing. For a time, we also used a barrier with heavy concrete blocks and cable stretched between them.”

At the end of the project, Ideal Landscape Group planted more than 1,000 new native trees, shrubs, sedges, and flowers. “We wanted to be sure we planted back even more trees than we took out,” Owens said. “Vegetation is already growing back and looking really healthy.”

Open since May, “The expanded greenway allows people of all ages and abilities to see everything this incredible park has to offer,” said Susan Trautman, CEO of Great Rivers Greenway. “From the soaring bluffs and wooded hillsides, to the breathtaking views of the Mississippi River – Cliff Cave Park’s natural beauty is more accessible for all to explore and enjoy.”